Anyone 12 years of age and older is eligible for the COVID-19 vaccine.
Find your nearest vaccination location here or call (833) 621-1284 to schedule an appointment near you.

“Mite” is a term commonly used to refer to a group of insect-like organisms, some of which bite or cause irritation to humans. While some mites parasitize animals, including man, others are scavengers, some feed on plants, and many prey on insects and other arthropods. In fact, there are nearly as many different types of mites as there are insects. Like their relatives, the ticks, mites pass through four stages of development: egg to larva to nymph to adult. All stages have eight legs except the six-legged larva.

Most mites never come in contact with humans, but some that do can affect a person’s health. Yet, in many situations where mites or other “invisible” arthropods are believed to be biting or “attacking” people, no causative organism is present. The irritation may be real or imagined: real, due to mechanical, chemical or other inanimate irritants, or imagined due to a psychological disorder.

While mites rarely transmit disease to humans in the United States, they definitely impact health in ways that range from simply being a nuisance when they enter homes in large numbers, to inflicting severe skin irritation that can cause intense itching. The most commonly encountered mites, including those that can adversely affect human health, are listed below.

This mite sometimes enters homes and other buildings by the thousands, causing panic among residents. Though they do not bite or cause health-related problems, clover mites can be a nuisance. If smashed when they crawl over carpets and drapery, the mites leave a red stain. Clover mites can be red, green or brown, and have front legs that are about twice as long as their other legs. They feed on clover, ivy, grasses, fruit trees and other plants. Well-fertilized lawns are favored. Clover mites enter homes when their food plants are removed or dry up. They are most active in fall, and will seek refuge in structures as colder weather approaches, when molting (shedding skin) and when laying eggs. Typical of many mite species, all clover mites are females capable of laying viable eggs without fertilization. They have no need for male mites!

Much information (and misinformation) has appeared in recent years about house dust mites. Virtually invisible to the naked eye, house dust mites are nevertheless real. It has been shown that, like cockroaches, dust mites and their feces can become airborne and are one of the most common indoor allergens. That is, most persons diagnosed as being allergic to “house dust” are actually allergic to the dust mites whose bodies and feces are major components of dust. Roaches and dust mites have also been implicated in triggering asthma attacks. But, unlike rodent mites, itch mites and chiggers, skin irritation is rarely caused by exposure to dust mites. Although they may “hitchhike” on clothing, dust mites do not live on people. They feed primarily on dander, flakes of dead skin that fall from people and animals. Upholstered furniture, pillows and mattresses typically harbor more dust mites than carpeting. 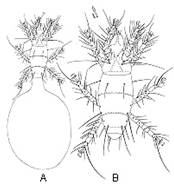 These mites prey upon insects. Species including the straw itch mite (P. tritici) infest stored products. Humans are bitten when they contact straw, hay, grasses, leaves, seeds or similar materials harboring the mites. Another species (P. herfsi) also attacks insects living in sheltered locations, including the larvae of midges (gnat-like flies) in leaf galls, and the eggs of cicadas beneath tree bark. When separated from their insect prey, itch mites may contact and bite other animals including humans.

The mites cannot be seen and the bites are not felt, but leave itchy red marks that can resemble a skin rash. When itch mite populations ‘explode,’ people and other animals may receive numerous bites. Fortunately, the mites cannot live on humans, do not survive indoors, and are not known to transmit disease.

A) engorged itch mite  B) female before feeding

Rodent and bird mites may bite people when their hosts die or abandon their nests. Three types of rodent mites readily bite humans: the house mouse mite(Liponyssoides saguineus), spiny rat mite (Laelaps echidnina) and tropical rat mite (Ornithonyssus bacoti). The house mouse mite prefers to suck the blood of mice, but also will bite rats and people, often causing a rash around the bite. They prefer warm places (e.g., around pipes and furnaces) where rodents live. The spiny rat mite feeds on rats at night and hides by day in cracks and crevices around rat nests and resting places. The tropical rat mite’s bite is painful and causes skin irritation and itching.

Mites that normally infest birds also bite people. The northern fowl mite (Ornithonyssus sylviarum) and chicken mite (Dermanyssus gallinae) primarily infest chickens, but also pigeons, starlings and sparrows. The northern fowl mite cannot survive for more than a month off its host, while the chicken mite hides in cracks and crevices near bird nests during the day and feeds by night. Cheyletiella mites infest both birds and mammals. They may prey on other mites and insects living on the host’s skin. They can cause a mange-like condition in pets, and itching in people who handle infested pets. They do not stay long on humans.

Two species of chigger mites attack humans and other mammals, birds and reptiles. The nymph and adult stages prey on insects. It is the six-legged larval stage that typically feeds on rodents or ground dwelling birds but will bite people when they are available. Chigger larvae are red to yellow in color and appear as scarcely visible specks. When they detect the carbon dioxide exhaled by an animal, they climb on soil or vegetation and wave their front legs to contact it, then grasp it with their mouthparts. They do not suck blood but cut into the skin, inject skin-digesting saliva and suck up the liquefied skin. If not dislodged, the chigger will feed for several days. The bite becomes inflamed, hardens and itches. Chiggers spend most of their lives in cracks in the soil. They are typically found in rural, less disturbed areas, but can persist for years on soil in new subdivisions.

Sarcoptes scabiei are mites that infest mammals, including man. Most human infestations result from person-to-person contact. Although they can transfer from animals to humans and vice versa, several types of scabies mites exist, each having a preferred host species on which it reproduces. In dogs, scabies mites cause mange. Scabies is the most common and important condition resulting from mite infestation of humans. Unlike other mites, scabies mites actually burrow and produce tunnels one centimeter or more in length just below the surface of the skin, in which they lay eggs. The mites are believed to feed on skin and secretions. The entire life cycle (10-17 days for human-infesting scabies mites) is spent on their host. Without a host, they survive only a few days. In previously unexposed individuals, a scabies infestation may go unnoticed for more than a month. Then, severe irritation and itching develops, especially at night.

The first step in determining the true cause of irritations that may involve mites is to thoroughly inspect the premises and identify any organisms discovered. The simple fact that all mites are tiny creatures, some so small they can be seen only with magnification, often makes inspection and identification difficult. Likewise, mites that affect humans are a diverse group, each with very different habits, all of which investigators should be aware.

Seek medical attention when exposure to mites is suspected as the cause of skin irritation. This is certainly true in the case of scabies infestations that will require medication. In addition, bedding and clothing of scabies-infected persons should be washed regularly. Click here for more information about the treatment of scabies.

When mites have been identified, appropriate control measures can be employed. A vacuum sweeper can be a valuable weapon in the mite control arsenal. Infestations of clover mites, rodent and bird mites in and around structures can sometimes be eliminated by vacuuming alone. Vacuuming may be less effective, but still of value, in controlling various food mites, straw itch mites and dust mites. Note that dust mites are not prevalent in ductwork; therefore, duct cleaning is not recommended for dust mite control. However, a high-efficiency particulate air (HEPA) filter can be installed to help prevent airborne allergens, including dust mite particles.

Moisture control also can be important. Mites transfer air and water through their body walls and are subject to desiccation at low humidity. Dust mite populations, for example, suffer when a relative humidity of 50 percent or less is maintained. On the other hand, high humidity can cause mite populations to increase exponentially.
Well-ventilated homes in dry climates contain few dust mites. Homes with a relative humidity that consistently rises above 50 percent can contain more than 100 dust mites per gram of dust. To reduce dust mite numbers, a relative humidity of less than 50 percent must be maintained for several weeks. Any fluctuation in humidity, however brief, seems sufficient for dust mites to remain and reproduce. Daily activities such as air-conditioning and showering, will cause humidity levels to fluctuate in portions of the home. Thus, other means of controlling dust mites should be employed in addition to humidity control.

For dust mites, products containing benzyl benzoate, and possibly abrasive dust formulations, may provide some control when applied to flooring and floor coverings. Bedding, draperies, floor coverings and furniture should be cleaned regularly. Pillows, mattresses and upholstered furniture can be discarded or sealed in plastic covers to help prevent dust mite infestation, and to reduce ongoing infestations and their associated allergens. Persons suffering from allergic reactions or asthma should consult a physician.

Exclusion methods also can be used for certain mites, e.g., clover mites. Structural entry points, e.g., gaps in and around foundations, doors, windows, vents, utility lines, etc., should be sealed. This will help to keep clover mites outdoors along with rats, mice, birds -- and the mites these pests bring when they are allowed to nest in structures. If nests are found, they should be removed and the area around them vacuumed. Other non-chemical methods include maintaining a plant-free border around foundations and reducing the amount of fertilizer applied to lawns – both of which help to keep clover mites away from structures.

Pesticides labeled for use against mites, known as miticides or acaricides, can be effective against clover mites and chiggers in grassy areas. For chiggers, however, insect repellents containing 7 percent to 30 percent “DEET” should be used as the first line of defense. To dislodge any chiggers that may have attached, take a hot, soapy bath or shower immediately after visiting natural areas where chiggers are present.