Anyone 12 years of age and older is eligible for the COVID-19 vaccine.
Find your nearest vaccination location at https://www.vaccines.gov/ or call (833) 621-1284 to schedule an appointment near you.

The dark speck that suddenly appears when you walk across the carpet, then disappears, is likely a flea. It’s a bloodsucker, reddish-brown, about one-eighth of an inch long. Using a magnifying glass, you’d see the flea’s body is flattened from side-to-side and it has long claws on its legs – both are adaptations for traveling between hair shafts. The flea also has spines on its mouth, legs and back to help prevent it from being groomed off.

Nevertheless, a dog will probably pick off many of the cat fleas it hosts. Cat fleas(Ctenocephalides felis) are more common on cats, dogs and humans than dog fleas

(Ctenocephalides canis) and human fleas (Pulex irritans). Each has its preferred hosts. The human flea prefers the blood of humans and pigs. Cat and dog fleas prefer cats and dogs, though children can become infested when pets sleep or rest on the same bed. Cat and dog fleas also will infest certain types of wild carnivores, including opossums and raccoons, but not squirrels, rats or mice. While these two species do not carry human diseases, they can carry tapeworms (Dipylidium caninum) that infect dogs.

Other flea species occasionally encountered by humans include the oriental rat flea(Xenopsylla cheopis) and the northern rat flea (Nosopsyllus fasciatus). These fleas live on Norway rats and roof rats, and are capable of transmitting plague and murine typhus to humans.

Fleas often probe the skin before taking a blood meal. After 30 minutes, lines or clusters of itchy red marks appear. On sensitive persons, bites develop into raised bumps within 24 hours after being bitten.

Fleas have been associated with humans and other animals for thousands of years. A bacterium (Yersinia pestis) spread by fleas killed 25 million people, more than a quarter of the European population, in 14 th century Europe. This was the “black plague.” Epidemics also occurred in Egypt, Africa, China, India and even the U.S., before the discovery of antibiotics. All told, perhaps 200 million people have died of plague – more than have died in all the wars in history.

Today, plague occurs worldwide. Each year, a few cases of bubonic plague are recorded in the United States, mostly in the Southwest. The disease is typically carried by wild rodents, and transmitted to the fleas that bite them. The digestive system of an infected flea can become blocked by rapid reproduction of the bacteria, causing the flea to bite repeatedly in an attempt to avoid starvation. Humans typically contract the disease from the bites of infected fleas, or through skin abrasions that contact the blood of infected animals or the feces of infected fleas.

Bubonic plague occurs most often where persons live or participate in outdoor activities in close proximity to wild rodents, such as rock squirrels, ground squirrels, prairie dogs, chipmunks and rats. Pets also bring plague-infected fleas into the home. Cats are highly susceptible to the disease. Outbreaks can arise in urban and rural areas, especially where conditions are primitive or unsanitary.

Symptoms of bubonic plague develop within one week of exposure to the bacterium, and may include headache, fever, weakness, fatigue and painful, swollen lymph nodes known as “buboes.” The disease responds well to antibiotics, but untreated persons may die within a week of showing symptoms.

Another disease transmitted by fleas is murine typhus. In the United States, only a few cases are reported annually. These typically occur in Texas, or result from travel abroad, especially to tropical countries. Transmission of a bacterium (Rickettsia typhi) that causes murine typhus takes place in rat-infested areas, in the same manner as mentioned above for bubonic plague, and by inhalation of airborne flea feces. Headache, body aches, fever and, occasionally, a rash and other symptoms develop within two weeks after infection. Like plague, murine typhus responds well to treatment with antibiotics.

The Secret Lives of Fleas

We are most familiar with adult fleas, those specks that jump and occasionally bite, but spend most of their lives on cats and dogs. Fleas reproduce rapidly. Eggs are laid on the animal while it sleeps or rests. They are not sticky and fall down into the pet’s bed – where the offspring are most likely to find food.

The eggs hatch into tiny (1/8-inch) larvae; white, worm-like, legless and blind. They shy away from light and wiggle their way down into the animal’s bedding, carpet, grass, etc. This stage has chewing mouthparts and does not suck blood. They do, however, feed on digested blood in the form of feces from the adult fleas, as well as bits of dead skin, feathers and other organic debris. After growing through three molts (shedding of the exoskeleton) the larvae become pupae, spinning silken cocoons, which they camouflage by attaching bits of debris.

Perhaps a month after the eggs are laid, adult fleas emerge from their pupal cocoons. Emergence of adults is triggered by heat (of people and pets), carbon dioxide (breath) and by physical pressure (e.g., from people and pets walking or lying on them). Thus the movements of unsuspecting humans can attract newly-emerged cat fleas that would otherwise prefer cats and dogs. To improve chances of contacting a passing host, newly-emerged fleas tend to move upward on vegetation, carpet, drapes and furniture. Their eyes are most sensitive to yellow-green light – the color of vegetation – and they are attracted to dark moving objects against a light background, such as a dog against foliage, or a person against a wall. To contact a host, they jump a distance of up to one foot after detecting the presence of warmth and carbon dioxide. Once it makes contact, the cat flea begins feeding on the host’s blood. If dislodged, it usually dies within two days. 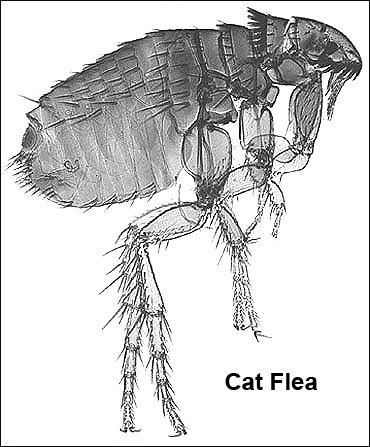 Knowing the cat flea’s life cycle is critical to successful management of flea infestations. Control measures should focus on where the fleas are found and where they are suspected to be. Adult fleas are found on their hosts, so, pets should be treated with prescription or over-the-counter treatments. These include products containing fipronil or imidacloprid, active ingredients that kill fleas but have relatively low toxicity. This allows them to be applied as spot treatments directly onto pets. Another, containing lufenuron, is a systemic product taken internally. It kills fleas when they feed on the pet. As with other pesticides, misapplications may unnecessarily expose people and pets, and may not provide adequate control. To get your pet treated, you may want to visit a veterinarian. Or, if you choose to treat the pet yourself, be sure to select the correct product and follow the label’s directions.

Newly emerged adult fleas, flea pupae and larvae, are found where infested animals rest and sleep. Typical flea “hot spots” include pet beds and bedding. These should be washed regularly. Other hot spots are rugs, furniture (including spots under the furniture) and outdoors in and around dog houses, under porches and bushes. Carpeting, rugs and furniture should be vacuumed thoroughly and frequently. Promptly dispose of vacuum contents in sealed containers, such as plastic bags. After vacuuming, steam cleaning of furniture and floor coverings will help eliminate remaining fleas.

Flea traps also can be useful, placed wherever adult fleas are found or suspected. These devices are electric light traps. They emit light and warmth, attracting adult fleas, then capturing them on sticky inserts that are easily removed and replaced. Flea traps are a non-toxic supplement to other control methods, and valuable as monitors to discover and pinpoint flea activity. Flea traps alone, however, should not be expected to eliminate flea infestations.

The benefits of vacuuming cannot be overemphasized as a means of flea control. Vacuuming picks up all stages of fleas, directly reducing the population. It also removes dirt and spreads carpet fibers that can interfere with the penetration of pesticide applications (one reason why total release aerosol “bombs” are not very effective against fleas). In addition, physical pressure on the carpet from vacuuming can trigger the emergence of fleas from their pupal cocoons, exposing them to pesticide applications.

After vacuuming and cleaning, pesticides labeled for flea control can be applied as spot treatments. Products containing permethrin or pyrethrins may kill adult fleas, but not flea eggs and pupae. Dust formulations, such as those containing boric acid, silica or diatomaceous earth, will kill flea adults and larvae. These materials can be applied as a very fine layer of dust to areas likely to harbor fleas, such as rugs, carpeting, cracks in flooring, beneath furniture cushions, in crawl spaces and under porches.
“Broadcast” applications of pesticides to the entire carpeted area of a residence were once common practice for flea control. Today, few, if any, products are registered for this type of application because of concerns about pesticide use, and because fleas typically occupy certain spots within a structure. Fleas are unlikely to be in the center of a spacious room or sunny yard. This is because pets typically do not rest in these spots and they lack enough organic and fecal debris (from the feeding of adult fleas) to feed developing larvae. Also, fleas require relatively high humidity for development. A sunny spot in the middle of a lawn would usually be too hot in summer and have insufficient moisture and humidity to support fleas. Thus spot applications of pesticides are most effective.

Growth regulators such as methoprene or pyriproxyfen are another effective and less toxic alternative. Active for several months, growth regulators provide no “knock down” of adult fleas, but effectively disrupt the flea life cycle by preventing larvae from maturing into adults.

Note that where liquid pesticides are applied, all pets should be removed from the premises. Birds, reptiles, amphibians and fish are extremely sensitive to many pesticides. Before applications are made, pets should be removed or their containers tightly sealed. Aquarium filters and air pumps should be unplugged. Always read the product label for directions. After application, pets and people should be kept off treated surfaces until the surfaces are completely dry. Treated areas can then be vacuumed again to trigger the emergence and movement of fleas, increasing their exposure to the pesticide.

If you employ the various methods listed above, you should see a significant reduction in your flea population. You should not, however, expect to immediately eliminate all of the fleas. In the pupal stage, fleas are resistant to pesticides and may remain hidden in their cocoons to emerge weeks or even months later. Also, pesticides such as dusts and growth regulators, work slowly. In addition, you may have overlooked some flea hot spots. Infested items, such as furniture, may have been brought in, adding to the flea problem.

Occasionally, household pets are not the source of flea infestation. Opossums, raccoons and stray cats living in attics, crawlspaces and under porches can harbor fleas, making it necessary to eliminate these animals from the premises. Please contact the Illinois Department of Natural Resources at 217-241-6700 for information on controlling wildlife.

Flea problems can be challenging. Complete control requires knowledge, attention to detail and perseverance. Those unwilling or unable to conduct a complete flea prevention effort should consider hiring a pest management professional.